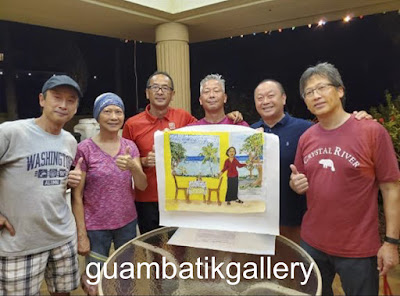 I rarely do commissions for portraits unless I know the subject personally.  Her daughter-in-law, Debbie, asked me to paint Shirley's portrait as a birthday gift to her husband, George.  I have frequented several of the Shirley's restaurants over the years, enjoying her excellent shrimp fried rice among other delicious dishes for which she was well-known. I had met her a few times but didn't know her personally. Portraits are so subjective, I feel I have to know the person in order to portray a bit of their personality.  Debbie shared many photos of Shirley and talked about her life and aspects of her personality that she felt were important.  Through our conversations, I was impressed with the accomplishments of this woman.  After making a few sketches based on photographs, Debbie agreed that I had captured her look and personality, so I proceeded with the painting.  Debbie was thrilled with the result, and kindly sent me this photo of the unveiling for Shirley's children.


~ Shirley came to Guam in 1981 from Hong Kong, where all the children were born and raised.  As they entered middle school they came to Guam to stay with their father who had moved here to open a scrap metal business.  Once all the children had gone to the US mainland to attend college, Shirley
moved to Guam to help with her husband’s restaurant, Istimewa.  In 1983, with the help of her eldest son, Edward, she opened the original Shirley’s Coffee Shop in West Agana, depicted in this painting.  She later helped her daughter and sons open 3 more locations on Guam and one in Saipan.  Shirley wanted to be sure that her customers always got the best quality and good portions of the food that she made, at an affordable price.  She instilled a hard-work ethic in all her children, stressing that education was of the utmost importance.  After completing college with engineering degrees, all of the boys gradually returned to Guam to start their own businesses.  Shirley passed away in November of 2009, leaving a legacy to generations of residents who enjoyed weekly family Sunday brunches and many delicious lunches at SHIRLEY’S. Daughter, Stella (Nurse) owns Harmon Shirleys Sons:  Edward, Food Wholesaler, Deceased 1987 David (Chemical & Nuclear Engineering) Shirleys Tamuning George, (Petroleum Engineer), Quality Distributors Samuel (Metalurgic Engineer), Alliance Metal Specialties Richard (Civil Engineer) Agana Shirleys Peter (Computer Engineer), VP Quality Distributors. Mama Shirley left 13 grandchildren and 11 great grandchildren.