THE DOLOROSA, or OUR LADY OF SORROWS

April 14, 2019
THE DOLOROSA, or OUR LADY OF SORROWS
The statue showing Mary’s pain of seeing her Son, Jesus, brutalized and crucified, is used in Catholic Churches throughout the world especially during Holy Week.  It is usually displayed on Good Friday, before His resurrection on Easter Sunday.
I had a very personal experience with the Dolorosa this year.  I was asked to “touch up” a statue in readiness for our Good Friday services at St. Joseph Church in Inalahan.  This particular statue has been housed in the dome-shaped shrine in front of the church, built by the late Jesus Meno Crisostomo more than thirty years ago.  I told his son, Edward, that I would use my best painting skills but I am not trained in proper materials or procedures used in restoration of statues. What little I know is based on conservation issues of historic homes in our village. 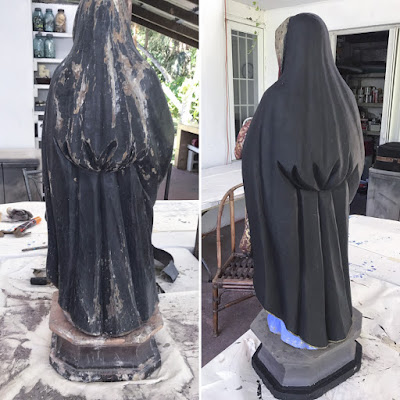 This Dolorosa is about 24 inches high, and weighs at least 150 pounds - more than I can lift!  It is made of a very dense, heavy wood, (ironwood?) which was cracked in several places. 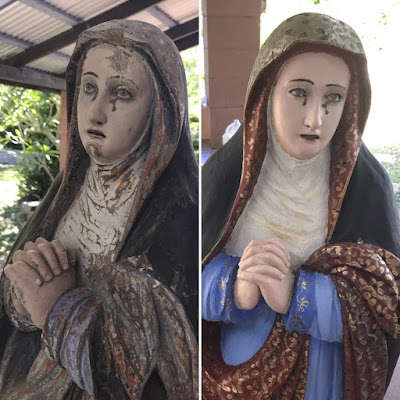 I began to manually sand the cracked areas and applied wood putty to the cracks.  I filled in chipped areas with the wood putty.  As I was sanding away the paint, other colors emerged.  Under her black hood, the entire area appeared to be gold! 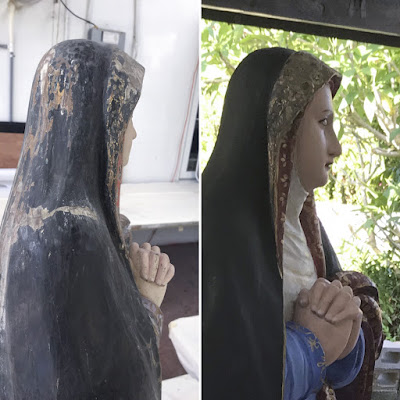 The wimple - cloth covering her neck and chest - usually white, again revealed gold underneath.  I was especially concerned about getting her face color and texture correct.  She has such a beautiful, delicate face, including parted lips and a tiny row of teeth.  She has glass eyes.  I suspect that her face is the original paint because the wood grain was directly underneath.  Again, I didn’t want to paint over the tears because I suspected it was the original painting.  Hoping I made the right choice, I used Windsor & Newton alkyd oil paints to mix her skin color.  For the rest of the statue I used acrylic and latex paint. 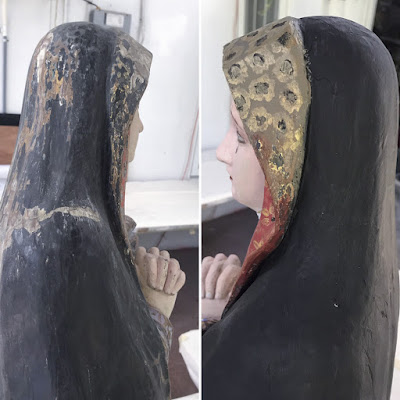 Sanding the hood and draped part of her cloak revealed a rich brocade design of gold, red and burgundy under the blue paint. On each side of her hood I could see the original gold, red and black design.  I kept that as I found it and painted a simplified version of that design around the top of her head. 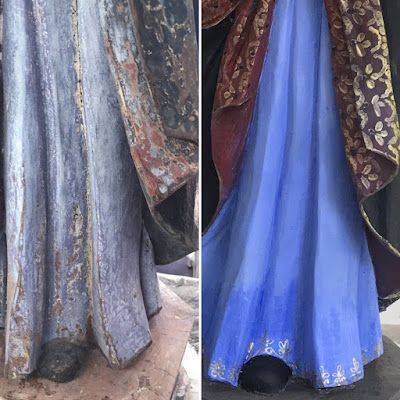 Moving lower, the rich brocade design continued along the edge of her cloak.  Rather than try to replicate that design I decided to honor the artistry of Tun Jesus Crisostomo by painting gold fleur de lis over a deep red background.  I recalled his clever way of forming the delicate arch still standing in front of the church, complete with a 3-leaf fleur de lis pattern that he had formed in concrete using homemade molds made out of metal cans.  I recall him installing this arch and the elongated latte posts in the 1980s, soon after he had completed the dome-shaped shrine that housed the Dolorosa. 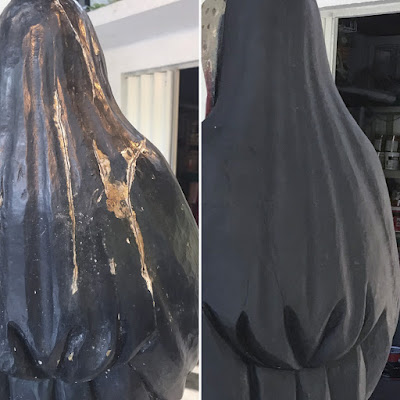 It also looked like her dress had a rich pattern dominated by blue, with gold and red patterns.  However, I decided to keep the blue color that had covered it, adding just a thin design of fleur de lis in gold along the hem.  The same gold pattern circles her sleeves. 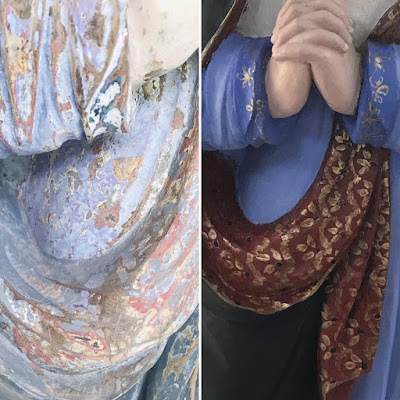 My training as a folklorist helped me to understand and appreciate the simplification of this statue and of our historic statue of Saint Joseph, Husband of Mary.  The carving style and wood used is similar in both pieces.  Mark Del’Isola, trained in the European painting of religious icons, restored our St. Joseph statue in 1998 (commissioned by 1st Lady Geri Gutierrez) when our church was rededicated after extensive rebuilding by the Guam Preservation Trust.  Based on the carving style he estimates that our St. Joseph statue dates back to the 1600s.  I suspect that this Dolorosa is of the same era.  Research of statues from this era shows extensive use of gold and many embellishments.  I suspect St. Joseph underwent several transformations since his arrival in Inalahan in 1680.  After restoration to its original colors in 1998, several of St. Joseph’s long-standing parishioners objected to its new colors and use of gold.  To them it wasn’t traditional, nor was it practical.  To our parishioners, St. Joseph is a hard-working representative of our farming and fishing community.  A simple carpenter didn’t wear gold.  Furthermore, the restored gold base didn’t make sense when loading and securing the statue to the korosa to parade around the village on fiestas!  It wasn’t long before the gold base was again covered with black paint!  So the same probably happened with this Dolorosa.  The parishioners use her during our most somber event of the year - the death of Our Lord Jesus Christ, son of Mary.  It didn’t make sense to embellish her with gold and rich fabrics.  She is in eternal mourning, and her revised clothing reflects that. 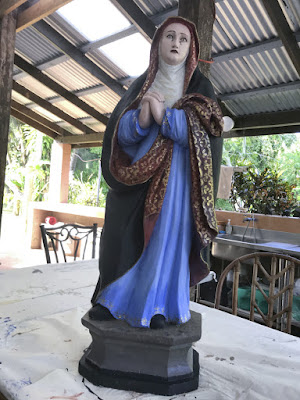 I feel honored to have had the opportunity to discover the secrets of this beautiful Dolorosa.  I hope I met the expectations of our parishioners in the choices I made.


UPDATED: THE DOLOROSA DURING MASS AND PROCESSION 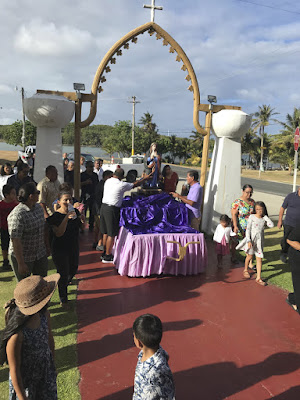 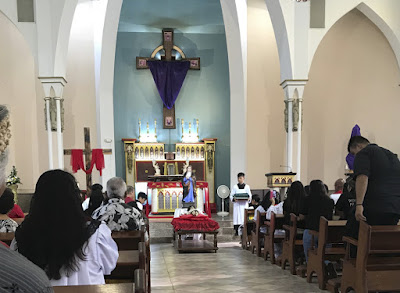