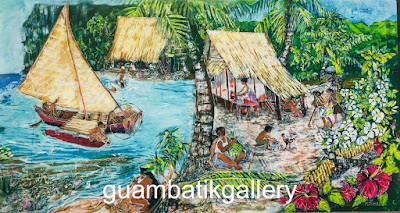 It is finally finished!  I struggled for several months, distracted by
travel and other daily challenges, to create the concept, draw the design,
transfer to silk and go through the several stages of batik painting.  The
concept of layered forms involved a separate set of issues, deciding how
much to build up the layers to create another dimension of shapes within
the painting:

GUINAHAN I ISLA-TA   (RICHES OF OUR ISLAND)
This mural depicts the cultural treasures and natural resources of Guam
from ancient times into the early 20th century.  Contemporary Chamorros
use these vignettes as a touchstone to their heritage and are re-creating
many of the lost arts such as the lateen-sail canoe (Sakman). The Latte-
stone pillars of ancient houses are proudly referred to in stories, songs
and dances.  Some practices persisted, and are now being revived as
contemporary art forms:  pandanus and coconut leaf weaving, and various
fishing and farming practices.  This renaissance of cultural practices
gives voice to the fact that the Chamorro people have adapted and
survived.