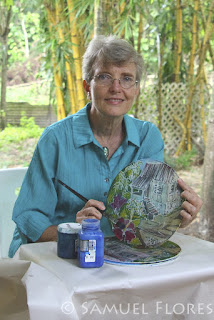 Judith (Judy) Selk Flores, PhD, retired in March 2011, after serving as Advisory President and Historian for Historic Inalahan Foundation, Inc., a non-profit Corporation whose mission is to revitalize the Inalahan Historic District.  Originally from Colorado, Flores and her family moved to Guam at age eleven when her parents accepted teaching jobs in 1957. The family was the first off-island American family to be housed in the southern village of Inarajan, where Flores grew up immersed in the rich cultural traditions of the village. She learned to speak Chamorro fluently and married into the culture. She and her husband, Juan N. Flores, have two grown children and seven grandchildren.

Artistically inclined from an early age, Judy Flores earned a degree in art education from the University of Guam and taught art in secondary school for ten years. During her early years of teaching she began experimenting with the wax and dye art media of batik, which became her primary medium of artistic expression. Flores used the batik medium to paint vivid impressions of Chamorro cultural scenes and activities that were rapidly disappearing in the 1970s. As she continued her master’s and PhD research, her paintings reflected her increased interest in Chamorro history and cultural values.

Judy hopes to share her knowledge about the history and culture of the island and people, here on this blog.
about judy selk flores phd blog welcome
Location: Guam